Please help me welcome today's guest blogger, romantic suspense author Mari Manning. Mari is going to tell us about her book STRANGER AT MY DOOR, and as a special treat, the two main characters of STRANGER AT MY DOOR, Dinah Pittman and Rafe Morales, will answer interview questions. Fun!


Stranger at My Door
A new romantic suspense by Mari Manning

As far as Dinah Pittman is concerned, men can’t be trusted. Especially cops. Her own father was a cop and a convicted felon who stole a small fortune before dying in prison. The best part? No one knows where the money is…and someone is willing to kill off everyone who knows anything about
it.

And Dinah is next.

Rafe Morales left the Dallas police force to settle down to a simpler life in the small Texas town of El Royo. Instead, he finds himself protecting an infuriating, tough-as-nails, oh-so-sexy victim—and driving himself crazy with a thoroughly unprofessional desire.

But as the body count rises, Rafe and Dinah must find a way to trust each other…before they both end up dead.

An interview with Dinah Pittman, heroine of Stranger at My Door

Where did you grow up?

I grew up in a small town in Texas. I’ll tell you the name, but it doesn’t matter since no one’s ever heard of it. It’s El Royo. For the first 17 years of my life, I loved it, then a crime destroyed my family, and I couldn’t get away fast enough.

When is your birthday?

I’m 25, so you do the math. I was born on November 1, and my mother, who believed in the stars, painted the night sky at it appeared the day I was born on the ceiling of my bedroom.

What would you do if you won the lottery?

Pay back the money my father stole.

An interview with Rafe Morales, hero of Stranger at My Door

Where did you grow up?

I grew up on Hacienda Osito, which means Little Bear Ranch in Spanish.

I’ve lived through my worst fear – I watched someone I love die before my eyes. Something broke in me that night. Most people call it my nerve. My mother swears it’s my alma, which means soul. Whatever it is, I hope it mends, but I don’t believe I will ever be whole again. 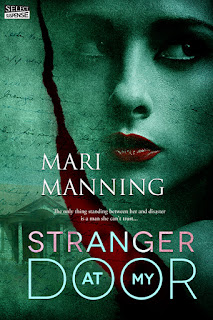 An excerpt from Stranger at My Door:
The front door rebounded and clipped Rafe’s shoulder. He kicked it closed with his boot before raking his flashlight beam across the unlit entryway. The hall was clear. His heart thumping against ribs, he burst into the living room. His light hit the figure of a woman, and his feet froze. He tilted the beam up and framed Dinah Pittman’s expressionless face.
Most girls would have screamed or hid when he kicked in the door. Not this one. She had balls, he’d give her that.
Her forearm lifted to shield her eyes from the light. “Who are you? What do you want?” She sounded tired. “I already told Teke, I don’t know where the money is.”
Rafe lowered the flashlight and rolled his shoulder to loosen a tight muscle. There were about two dozen abandoned bungalows in this part of town. When he saw a candle flickering in the window, he’d expected a confrontation with teenagers or maybe a squatter.
He stepped into the candlelight. “Officer Morales, ma’am. Got something against electricity?” As soon as the words were out, he regretted them. The pink flyers. She’d needed money to turn on the lights.
Her mouth tightened. “Get out.” Turning to a small table by the window, she gathered up scattered cards, probably her tarot cards. Had she found customers already?
He studied her as he summoned up an appropriate apology. She wore cut-offs and a white T-shirt. His eyes swept down her slim legs to her bare feet and red toenails before he could stop himself. Why were pain-in-the-ass women always hot?
“I didn’t mean to upset you—”
“Don’t flatter yourself.”
“That’s tough to do with you around.”
Her hand stilled for a moment, then returned to its task. “You could have knocked.”
“Sometimes we get squatters in these abandoned houses. They’re more likely to be discouraged by a show of force.”
“I could have been a mass murderer. Aren’t you supposed to call for backup?” She glanced down at his flashlight. “If I was a bad guy with a gun, you’d be dead, Officer Morales.”
“Rafe.”
She’d read him right. He’d tried to pull out his service revolver when he broke down the door, but—predictably—his hand had turned to Jell-O. After two years, he still couldn’t get past the night in Dallas when his beautiful, daring Sam’s luck ran out, and he’d avenged her but failed to live up to his own lofty ideals. So he relied on the element of surprise and big fists.
Gathering up the cards, she set them in a neat stack. “As you can see, I am not a squatter.” Her gaze flickered to his flashlight, then back up to his face. “There’s an empty house about two blocks down if you’re determined to rescue one.”
The corner of his mouth inched up. She’d be a handful…for the right man, which sure as hell wasn’t him. Not anymore. “Thanks for the tip.” 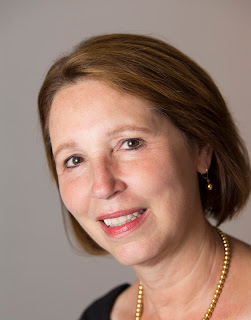 About Mari Manning
Let’s start with the fun stuff. I love small towns, mysteries, quiet men, laughter, old-fashioned spaghetti dinners. I love boots and shopping and jokes and Hershey’s dark chocolate and white wine. I love lots of things. But my first love is reading.

I love to read. Just about anything, but it has to be well-written. I go through periods where I am into historical novels or romance or mystery or history or biography. I never know when my desires will suddenly change.

Now for the writer-ish, official stuff: Mari Manning is the author of several contemporary romances and three romantic suspense novels set in the Texas Hill Country. Stranger at My Door is the first in her A Murder in Teas series. The second, Stranger in My House will be published by Entangled later this year. The third book in the series is Stranger in My Bed. Currently Mari is working on a series of cozy mysteries.

She and her husband live in Chicago.


Posted by Elizabeth Delisi at 7:00 AM

Happy to see you here, Mari!