How cold is it?

Make you think of anything? 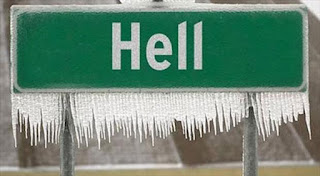 Yup, it's coooolddd here!
Posted by Elizabeth Delisi at 8:43 AM No comments:

THE FINAL STRAIGHT by Charlotte Howard

April Miller works for her best friend, Max Knight, on his livery and competition yard. Their friendship has withstood many turbulent times, and while April is deeply in love with Max, she is also aware of his womanizing ways and has refused to succumb to his flirtatious charms. When her ex, AJ, suddenly comes back with a business proposal, April finds herself torn between the two men.

“You up there?” she called. The thud of footsteps grew louder as she made her way up the stairs. It wasn’t long before she was in the doorway, hands on hips, surrounded by a halo of curls the same colour as her temper.

The dog had followed and was panting by her leg. April batted her away, and Max rolled his eyes at the anger and frustration that exuded from her every pore, turning his back on her and dropping the towel.

“What the hell, Max?” she exclaimed, but it wasn’t because of his nudity. She’d seen him naked more times than any other woman.

He stepped into a pair of tight boxer shorts and turned around, preparing himself for the grief he had been hoping to avoid.

“What have I done now?” he asked, walking towards the wardrobe and pulling out a pair of dark, shredded jeans.

“What’s the point? Do you even remember her name?”

He didn’t answer. She wasn’t expecting him to; she never did. Fastening the button on his waistband, he went to the chest of drawers and took out a clean T-shirt.

“Well, I’ll tell you what her name was,” April said, walking into the room. “Mellie Banks. Ring a bell?”

“It should,” she snapped. “Her father has three horses on this yard, or did until he turned up this morning and took them off.”

He moved behind her and started to massage at the knot of tension that had built at the base of her neck.

“Don’t try to appease me, Max,” she said, but he could tell that her anger was waning. He continued to press into her muscles, letting his thumbs make small circles either side of her spine. Bending his head to the curve of her shoulder, he placed his forehead on the sleeve of her polo T-shirt and took a deep breath, inhaling the dusty scent of straw and shavings.

“I’m sorry,” he murmured into her back.

She shrugged out of his touch and turned to face him. “You’re hopeless,” she sighed. The corners of her lips flickered into the smallest of smiles.

“We could just hide in bed all day,” he said, taking her hands and tugging her forwards. “Forget about Mellie Banks. Forget about the yard…”

“And who’s going to pay my bills when this place falls on its arse?”

The edge of the mattress connected with his knees and he fell backwards, pulling her with him. “You know I’ll always take care of you.”

She landed on top of him, inches away from his face. He lifted a hand and tucked a stray red curl behind her ear. With a frustrated groan, she rolled off of him and lay on her side.

“As much as I would like to be the next notch on your bedpost, we have a business to run.” She shoved herself up.

He watched as she straightened her clothes and ran her fingers through her hair.

“Anyway,” she said, glancing over her shoulder. “I’m not your type. I have a brain.” She flashed him a smile before bending down to pick up the towel and tossing it in his direction.

“Ouch.” He feigned a hurt expression before getting up to follow her. Bracken panted around his ankles.

“I’ll make you a coffee, and then if you need me I’ll be saving your business.”

Charlotte lives in Somerset with her husband, two children, and growing menagerie of pets and can always be found with a cup of tea in her hand. When she's not writing or running around after small people and animals, she loves to eat curry and watch action films.

Charlotte is an active (and vocal) member of the Yeovil Creative Writers.

Posted by Elizabeth Delisi at 11:13 AM 2 comments: