Today is a gorgeous spring day, sunny, warm, flowers blooming. It's hard to NOT be in a good mood on such a day. Even with all the shopping I had to do and errands I had to run.

And after yesterday's shopping debacle (looking for jeans and shorts and...um...certain unmentionables) and not finding anything I liked that fit me, and going into a grumpy fit of depression--well, today was indeed a glorious day as I found some of everything! Jeans ordered online, shorts and the other item purchased in-store. So I'm a happy camper.

I brought Koko home a new toy and he was playing with it within minutes of putting it in his cage. That's very gratifying--have had pets in the past that look at the toys you bring them, then look at you as if to say, "Are you nuts? You expect me to play with THAT?" So I'm happy Koko is easily amused.

This will be a working weekend, but it IS a weekend so there will be relaxation also. And NEXT weekend, Mother's Day weekend, I'll go with my daughters to the annual Sheep & Wool Festival, and come home with much new yarn to fawn over. Whoopee! Can't wait. It's my favorite yearly Mother's Day activity.

For all you mothers out there...how do YOU like to celebrate your special day?
Posted by Elizabeth Delisi at 3:32 PM No comments:

Today the gripes involve pain. After all, what's more gripe-worthy than being in pain?

I had surgery on a torn rotator cuff back in 2006. Once the doctor got in there with his scope, it didn't look as bad as he thought it would, so he just cleaned up loose and frayed ends and left it at that. You see, apparently if a rotator cuff is only partially torn, the only way to fix it is to cut it completely loose and then sew it back. You can't just sew the torn part, and since there was less tearing than he thought, he hated to cut through still-good tissue.

So. It's been good for some time now, but in the past two months, it's started to bother me again. And I'm afraid surgery on it, again, will be the only thing that will help.

In the meantime, I'm trying to do what I can to ease it, maybe even figure out a way to live with it. But that's difficult, because the pain is there every moment of every day, to one degree or another.

The worst times are when I'm working on the computer (naturally!) and when I'm trying to sleep.

On the computer, I've discovered that sitting in my office chair and stretching my arms out for the keyboard is what does it. Now, my main computer is a laptop, so I can move it around. Thus, I tried sitting on the couch with the computer in my lap. That is SO much better for my shoulder...

...but it's worse for my back. (sigh) I can't sit on the couch all day unless I want to be a cripple when I get up.

So I've tried an alternate solution, sitting in the recliner with the computer in my lap. That works better for my shoulder and the back is okay...but there's no electrical outlet within reach, so I can only work here for as long as the battery holds out.

As for sleeping...there is NO comfortable position. So I flop around every minute or two, until I finally pass out from sheer exhaustion. Once it go to sleep, it either eases up or just isn't enough to wake me, as I do manage to sleep all night. Go figure.

I tried taking Aleve for two or three weeks, but that only upset my stomach and didn't fix the shoulder. The heating pad is nice while it's on, but doesn't have any lasting effect. So, what's next? If it doesn't clear up, I fear a visit to my friendly neighborhood orthopedic doctor may be in store...

Hope you're having a healthier week than me!
Posted by Elizabeth Delisi at 10:04 AM No comments: 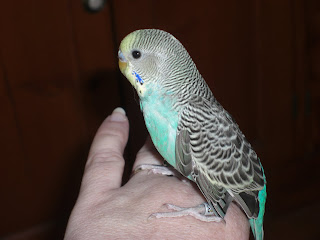 There! That should make anyone happy. :-)

Koko is getting more comfortable in his new home. He moves around easily in his cage now, and has even figured out how to swing on his swing. He plays with his toy now and then, either ringing the bell from underneath or by shaking the colored pieces of wood the bell is attached to.

But his favorite activity seems to be watching the birds outside. We've placed one of the four hooks in the house in front of a glass door, where he can watch the wild birds at the birdfeeders outside. He seems to enjoy it, and chirps and squawks, trying to enter into the conversation.

As for talking to ME...well, he hasn't learned to do that yet. But he does seem to listen intently when I talk to him. I hope soon he'll begin repeating things back...not that he'll know what they mean, but at least he'll know we're communicating.

Hope you have lots of healthy, happy communication with your loved ones on this beautiful spring day!
Posted by Elizabeth Delisi at 8:44 AM No comments: 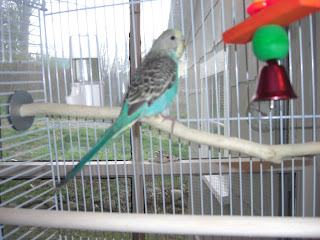 Koko! He's still getting used to his new home, still a bit flighty (ha, ha) but I think he'll settle in. I'm just happy to have some company again in this lonely house.
Posted by Elizabeth Delisi at 10:40 AM No comments:

I guess my first gripe for today is that I seem to have fewer gripes than I thought I would! But I guess I shouldn't complain about that. Should I?

My second gripe is with someone...the town officials, state head honchos, whoever is in charge of deciding what to do to fix the landslide up the street from us, so the road can be reopened. 'Cause, nothing is happening!

The biggest inconvenience for us is that the mailman won't deliver. According to the post office, he is not allowed to exit his vehicle in order to move cones. He can only get out for approved purposes...like bringing a box to your door or something that needs to be signed for. I guess moving cones to go up a closed road doesn't count as approved!

So for the duration, we have to run to the post office daily to get our mail. This wouldn't be bad if this is what we preferred...some people like having a post office box. But we don't have a box, so we can only pick up our mail at the counter, during the limited hours they're open.

Still, it's not much of a gripe, I guess.

My biggest concern today is a worry, not a gripe. Koko the parakeet has been home for 24 hours now and is just sitting in one spot in his cage, not eating or drinking or chirping. I know the move from bird-filled pet store to bird-free new home and new cage is stressful. I just hope he recovers soon! Because I'm not sure how long a tiny little bird can go without nourishment. Do send soothing thoughts Koko's way.

And if any of you out there have parakeets, do you have any tips or tricks for getting him over the adjustment period quickly? All thoughts gratefully accepted!
Posted by Elizabeth Delisi at 8:40 AM 4 comments:

I didn't write my usual Monday Gripes this week because Monday was such a beautiful day...warm, sunny, flowers blooming...that I just couldn't think of anything to gripe about! And that's a good thing, something to mention on my Friday Happies page.

Today, alas, is rainy, misty and gray. But that's what makes all those flowers bloom, I keep telling myself. I just hope it doesn't cause another landslide on our road...which has been closed for a week or two since the last one. Sheesh.

Yesterday was Grand Central Station at the bird feeders. I've kept the feeders filled all winter, but rarely saw any birds there. Well, spring has changed all that, apparently.

During the brief two-hour period where I was in sight of the feeders, I saw: pigeons, grackles, starlings, a blue jay, woodpeckers, a goldfinch, juncos, a purple finch, mourning doves, and brown-headed cowbirds. It was a real food fest! They went through the entire block of suet that was out there, and half the seed in the seed feeder.

Also, I've noticed the house wrens have returned to the birdhouse on the side porch and are busy screeching while building this year's nest.

And as if that weren't enough bird news, Koko may get to come home this weekend! When I visited him on Tuesday, they said he had begun to refuse the liquid baby food, so as soon as his weight stabilized on the regular bird food, he could come home. I'm certainly excited about that!

So all this happy bird chirping and watching can't help but make me happy, even on a gray spring day. What spring events cheer you the most?
Posted by Elizabeth Delisi at 9:30 AM 2 comments: 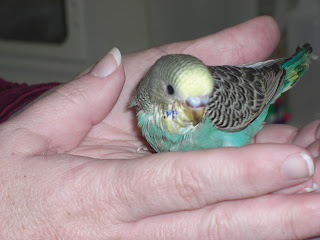 This is Koko. Is he not gorgeous? He's going to come home with me in a week or two, when he's fully weaned. In the meantime, I'm visiting him as often as I can, to get him used to me. It's a beautiful day, the sun is shining, and I'm off to another Koko visit. What more could anyone ask?

Hope your weekend is happy, too!
Posted by Elizabeth Delisi at 9:11 AM No comments: