This week, I’m participating in a charity blog hop raising funds for Parkinson’s UK, an organization that raises awareness of Parkinson’s Disease, help those with the disease learn to cope with the challenges, give out information and search for a cure.

The blog hop has a theme of “Curves Rule.” So I’m posting cover art, a blurb and an excerpt from “All Work and No Play,” part of the Torrid Tarot series at Ellora’s Cave. I hope you enjoy it! See the end of the excerpt for a giveaway and a surprise. 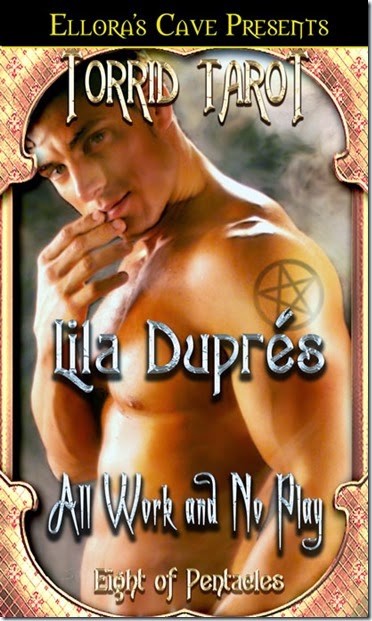 All Work and No Play blurb:

Julie Preston worked hard raising her younger sister Emily after their parents died, and creating a career. She gave up simple pleasures like love and relationships. So when a friend drags her to a singles bar, Julie’s ready for anything. She meets a gorgeous guy and they spend several passionate hours together. There’s real chemistry there, but Julie regretfully sticks to her promise: a one-night stand, no strings.

When Julie hires a tutor to help Emily pass English, she’s shocked to find he’s the man from the bar. Seeing him in her house makes it hard to keep her hands off him, but he isn’t looking for a long-term relationship since he’s a singles bar patron. Right? How many miles can Julie jog before she gives in and jumps him?

“You’ve done a great job of raising Emily on your own,” Tanya said, breaking Julie’s reverie. “No one could be a better mother to her than you’ve been. But that doesn’t mean you can never take a break. Kick back and have some fun. You know what they say about all work and no play?”

“Besides making me the Eight of Pentacles? It makes Jane a dull girl. I know. But who cares?” Julie said and shrugged, maintaining a stony expression she’d perfected over the last few stressful years. “I’m comfortable with my life just the way it is.”

But now, after five years of struggle, deprivation and want, some innately female part of her rebelled, something deep inside wondered if she were still attractive to a man. Had she really turned into the dull “Jane” who was all work and no play? So she’d given in and let Tanya talk her into going out this night.

Unfortunately, the evening had turned into a colossal waste of time as far as Julie was concerned. The music was too loud, the smoke hurt her eyes and throat and the only man who’d approached them had sported a greasy comb-over and smelled like mothballs.

“Time to go.” Julie held up her arm and tapped her watch so Tanya couldn’t mistake her meaning. “I have to get up early tomorrow to get to that board meeting—”

Julie’s jaw dropped and she faltered to a stop in mid-sentence. The most gorgeous man she’d ever seen was heading across the tiny dance floor, straight for their table. He was over six feet tall, with curly dark hair, broad shoulders and a muscular frame, and blue eyes that pierced her soul.

Halfway to her table, two women intercepted him, homing in on him like a barracuda scenting blood in the water. One was a blonde with a buzz cut and a mini-skirt the size of a napkin, the other a redhead with a frizzy perm and wearing enough stretched-tight spandex to gird the globe. They each put a hand on his arm, grinning like crocodiles and pressing up against him seductively. Julie could almost see their claws sinking into him.

Rats. Julie felt a stab of jealousy. It figured—she was finally about to meet the only good-looking man in the place and those two floozies were going to bag him instead. But that was what she’d expected of this evening. Total failure. So why was her stomach roiling with disappointment? Maybe she’d hoped and expected him to be too smart to fall for such obvious tactics?

But wait. He was peeling their hands off his arm gently but firmly, an annoyed look on his face. They persisted, he shook his head, glancing in Julie’s direction. After a minute or two of back and forth, at last they shrugged, pouted and slunk off. He resumed his path for Julie’s table again, the smile returning to his face as he caught her eye once more.

Tanya glanced over her shoulder in the direction Julie was staring, then turned back and kicked Julie’s shin under the table. “Close your mouth,” she hissed, tapping her chin with the back of her fingers for emphasis. “You look ridiculous.”

Julie snapped her mouth shut and swallowed, suddenly disgusted with herself. She was practically drooling, for heaven’s sake. Had it really been so long since she’d been paid any attention? She smoothed her long brunette hair with a trembling hand and took a deep breath to steady her nerves. He was just a man. Admittedly, a good-looking one but just a man. A man she’d like to eat for breakfast…

Hope you enjoyed the excerpt from “All Work and No Play.” And here’s a surprise for you: Lila Duprés is the pen name for…me! Shhh. It’s a secret.

GIveaway: One lucky commenter, chosen at random, will win a PDF copy of “All Work and No Play.” Be sure to use your e-mail address when you comment if you want to be entered in the drawing.

Smut for Good: Curves Rule is a blog hop with prizes galore to raise funds for Parkinson’s UK as this is Parkinson’s Awareness week. To find more curves, and seek out further prizes please visit http://smutters.co.uk/smut-for-good and if you can take a minute to please visit the Smut for Good: Curves Rule Just Giving Page at http://www.justgiving.com/curvesrule and donate whatever you can to help us reach our target of £100 to raise awareness of Parkinson’s and to support the charity Parkinson’s UK http://www.parkinsons.org.uk/ who help those with the disease learn to cope with the challenges, give out information and search for a cure.