J is for Jack

Jack is a pretty common name, it seems. Here are a few childhood-related Jacks. Jack be nimble; Jack Sprat; Jack and Jill; Little Jack Horner; Jack in the Box.

Then there are movie characters: Jack Ryan in “The Hunt for Red October;” Jack T. Colton in “Romancing the Stone;” Jack Slater in “Last Action Hero;” Jack Dawson in “Titanic.” But the most well known and my personal favorite is Captain Jack Sparrow in “Pirates of the Caribbean.”

And that brings me to MY Jack, named after Captain Jack Sparrow, of course: 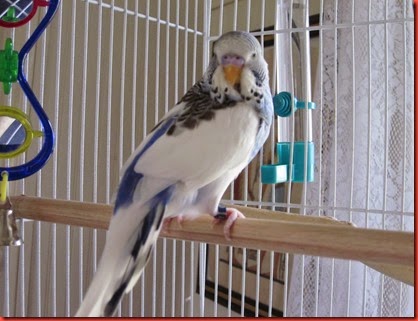 So, back to Jack. He talks a blue streak, whistles all kinds of whistles, and is trying to figure out how to whistle a short melody. He seems to have trouble with pitch…he can understand “how many notes” and the direction in which they go, but pitch is still iffy.

He loves having people talk to him, and his favorite position to be in while listening is hanging from the side of the cage, upside-down. Don’t ask me why…maybe we look better upside-down?

Although he says his own name and seems to understand it means him, he likes to add things to it. Thus we have Monsieur Jack, Good Boy Jack, My Jack, and presumably when he gets tired of all the names, he will say “Just Jack.” One of my favorites is Super Jack. I confess, I may have talked him into that one as when I call him that, I tend to sing the theme song from the old Hercules cartoon show when I was a kid (dating myself now). It goes, “Hercules, hero of song and story; Hercules, winner of ancient glory…” only in my version, “Hercules” becomes “Super Jack.” He seems to like having his own theme song.

He seems to know where the doors to the outside are, and he squawks a blue streak if he hears us going out. He likes company, doesn’t like to be left alone. He loves toys that make noise, or toys he can rip apart. And when he’s asleep with his head tucked under his wing, he’s just the sweetest thing!

So, since he gives me so much pleasure, I figured Jack deserved a post of his own. Here’s to you, Jack!

Posted by Elizabeth Delisi at 1:30 PM

Captain Jack Sparrow is also one of my faves. But your Jack is totally adorable.

I had a budgie called Jack when I was a kid. He was blue and white, too. Bought him with my confirmation money when I was 11. My mother taught him to speak. I got bored with him in my teens and he got angry with me for the lack of attention. When I used to sneak into the kitchen to steal chocolate (I became diabetic at 15) he'd make a load of noise to make people come in from the living room to investigate and get me caught - and I say that as a zoologist who knows he shouldn't anthropomorphize animals! He lived till I was 22, so we'd patched up our differences by then.

David, what a lovely story about your Jack! I suspect when you snuck into the kitchen, he started making noise to get YOUR attention. But you never know! ;-) As for anthropomorphizing animals...I figure, it is what it looks like until proven otherwise!

He is gorgeous, Elizabeth. I was surprised you haven't called him Captain Jack by his namesake. Do you or have you thought about adding him to one of your books' characters?

Kim, I do call him Captain Jack Sparrow sometimes. He likes it but doesn't say it. He's quite choosy about what he'll say.

I like the idea of putting him in a book! Hmmm.