F is for Fatal Fortune

I can’t resist posting a bit about one of my books today, since today is the letter F.
FATAL FORTUNE is the first book I had published (though not the first I wrote). 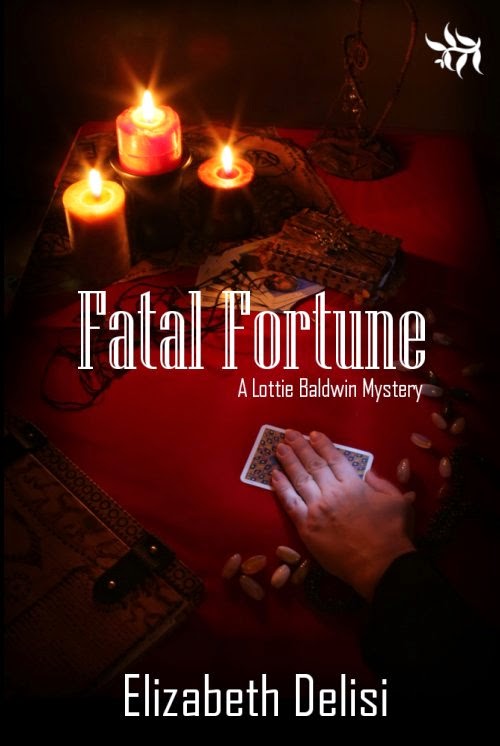 Here’s the info about the book:

Blurb: No one in Cheyenne, North Dakota believes in Lottie Baldwin’s psychic abilities; especially not Harlan Erikson, Lottie’s boyfriend and Chief Deputy in the Sheriff’s Office.

When a friend’s husband disappears, Lottie can’t leave it to Harlan to discover what happened to Harry.

Armed with her courage and her tarot cards, Lottie tries to solve the mystery herself, regardless of who attempts to stop her: Harlan, her friend—or the criminal.

Harry squared his shoulders. He’d do what he’d set out to do. He would stop the thing before anyone got hurt.

He stopped in front of the car where the figure remained on the hood. Having decided his course, Harry plunged in. “I know what you’ve been up to. I know all about it. Did you really think I wouldn’t find out? You didn’t cover your tracks very well.”

The figure grimaced. “You have more intelligence than I gave you credit for, I admit.”

“You can’t believe you’ll get away with it. If I found out, then other people will, too. Sooner or later, you’ll be stopped.”

“I don’t think so.” The voice was thick with conceit. “I have, as the saying goes, friends in high places.”

“Do you think they’ll go out on a limb for you? Jeopardize themselves, their careers and reputations, to protect you?”

“Yes. They have to. They’re in no position to do otherwise. I have certain...information about them. Information that could be very embarrassing, to say the least, if it were to come out.”

“I see.” Harry rubbed his hands together in the frigid night air, stalling for time. “That still leaves me. You can’t possibly have anything incriminating on me, and I don’t intend to back down.”

There was a short silence. “We’re both reasonable people,” the figure said at last. “I can make it worth your while to keep this quiet. Think of all the things you could do for your family with a large ‘bonus.’ You’ll find I’m very generous with my friends.”

Harry waved his hand. “No deal. You can’t buy my silence.”

The dark figure clenched its fists, raising them to chest level. “Then, you give me no choice. You can’t stop me.”

“Oh, can’t I?” Harry shook his head in disgust. “When you asked me this afternoon to meet you here, I hoped you’d had a change of heart, and I was willing to support you. I would have stood by you all the way. Obviously, I was wrong. I’ve been a fool.”

He turned away and started back toward his own car. The night air was crisp in his nostrils; a light snow was beginning to fall. Though disappointed at the outcome, he felt shaky with relief that the ordeal was over.

He heard a sudden, furtive noise behind him. Harry jumped, started to turn. Before he could see the source of the sound, face his foe, he felt a crushing blow on the back of his head. A million hot sparks exploded behind his eyes as he sank down toward the frozen ground.

For a moment, Harry lay motionless. The quiet night air was full of unwonted sound: heavy footsteps; muffled rustling; the jingle of keys. The car door slammed and tires spun. Above it all, he heard his once pounding heartbeat slowing as his body relaxed. The last thing he saw was the car’s red tail lights fading into the distance. And then eternal blackness overcame him.

Where to get your own copy:

Hope you enjoy reading about Lottie! Her next adventure is coming soon.

Posted by Elizabeth Delisi at 9:47 AM

Kim, you're right; FATAL FORTUNE is the first in the Lottie Baldwin mystery series. And it was my first published novel, though not the first one I wrote. SINCE ALL IS PASSING was my second published novel, but it could have been the first you read, as you said.

One thing I really like about FATAL FORTUNE and sequels though is it uses a tarot card image at the start of each chapter, which hints at what the events in that chapter will be. I commissioned a tarot deck personally to use for the Lottie Baldwin mystery series.

Wow, this sounds like an amazing piece. And wow, gorgeous cover art!

Good luck with the 2015 A to Z Challenge!
A to Z Co-Host S. L. Hennessy
http://pensuasion.blogspot.com

Thanks so much! If you're interested in seeing a sample of the Fatal Fortune Tarot, you can see it here: http://www.aeclectic.net/tarot/cards/fatal-fortune/

Your book sounds wonderful. I love a good mystery/crime novel. Great excerpt you shared. Made me want to read more.
Michele at Angels Bark

Thanks for visiting, Michele. I'm glad you enjoyed the excerpt! Always tough to decide which spot to share.