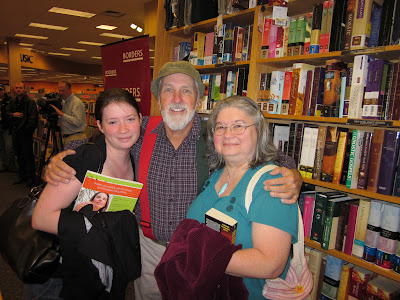 I'm trying to think of a gripe, but I can't because I'm still on a humor-induced high.

My daughter Helen and I had an awesome time in Concord on Saturday at a booksigning for Red Green, real name Steve Smith, the star of the long-running PBS comedy, "The Red Green Show." Set in the fictitious Possum Lodge, the show features Red and his friends, always good for a laugh and ready to fix anything with a roll of duct tape, "the handyman's secret weapon."

I can't believe how many people were there...we waited in line an hour and there were as many people behind us when we got up to him as had been in front of us at the start.

My husband couldn't come, but he had given me a good question to ask. So when I went up to Red, after shaking his hand and saying what a pleasure it was to meet him, I said, "My husband says the Man's Prayer every day, and he'd like to know if there's a Woman's Prayer." (For those of you who have never seen the show, the Man's Prayer goes like this: "I'm a man, but I can change, if I have to, I guess.")

He looked pleased and smiled and said, "You know, there was one episode where a woman's group took over Possum Lodge and they did have their own prayer."

I asked what the prayer was and after our picture was taken and while he was signing our books, he said the prayer was: "I'm a woman, hear me roar, I'm in charge, get used to it." Then he laughed and said, "You know, at one of these events, a woman showed up with the entire thing written out on her t-shirt."

I told him I'd never seen that episode, and he said, "You will." I told him how we'd loved watching his show in Kansas, but it wasn't on when we moved here to NH. Then it showed up recently. He said that was because he'd starting touring and part of the money for each appearance went to the local PBS stations. ;-) So I said, "Please keep touring, then! We want the show to stay on."

And then the store employees who were handling the whole thing hustled us on so the next in line could move up.

He was very pleasant and friendly, and didn't seem at all tired although he must have been, from all the pictures, signing, and smiling.

So there you have it...the story of the event! And the reason why I'm still smiling today.

If you're looking for the perfect gift for the home handyman (or handywoman) in your life, pick up a copy of Red's book, How to Do Everything, From the Man Who Should Know". And to check out his Facebook page (doesn't everyone have a Facebook page these days?) go here: Red Green.

As Red would say: keep your stick on the ice!
Posted by Elizabeth Delisi at 10:41 AM

Very Nice Blog…Thanks for sharing this information with us. Here I am sharing some information about pressure washing Fairfax VA.