Please help me welcome author Becky Flade, whose book A LOVE RESTRAINED is due out from Tirgearr Publishing. Here's a little information about her book: 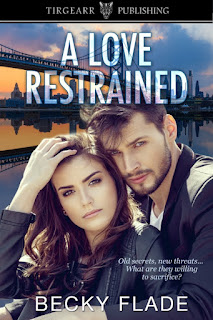 Philadelphia police officer Kylee Parker is dedicated to protecting and serving. She sees the work in absolutes: right and wrong, black and white, good guys and bad guys. That is, until she chases a drug dealer into a dead-end alley and finds the bad boy she had a painful crush on throughout her teen years has turned into a more dangerous and more attractive man.

Jayson Donovan knows he doesn’t deserve someone as good as Kylee Parker. As the right hand man to a local drug-pushing mobster, he’s solidly on the wrong side of Kylee’s moral compass. But he can’t help reaching for her time and again when he knows he shouldn’t.

Even when his secrets threaten them both.

Enjoy the following excerpt from A Love Restrained:

Spring in the city brought people out of winter hibernation like a siren song, but as the temperature rose, so in turn, did the crime rate. Cops had  to be sharp as they walked the streets of Philadelphia. In her ten years on the force, on these streets, she’d seen a lot of crazy and often stupid  criminals do a lot of crazy and often stupid things. But to be so brazen,  or so plain dumb, as to do a hand-to-hand drug buy right in front of two uniformed officers rode high on her list of top ten.

“Saw what?” Hunks of half chewed soft pretzel fell from Sherman’s mouth.

Pete Sherman’s not a bad cop, just not an observant one whose paunch  portrayed his love of all things fried and his reupholstered recliner. He hadn’t seen a thing in the last six months. But he took direction well, despite the fact he had seniority.

“There, across the street.” She pointed. “The junkie walking east just scored off the guy in the leather bomber heading west. I swear the dealer looked right at us before the exchange. Call it in, Pete, and grab the junkie. I’m going after the dealer.”

Sherman didn’t argue. She took off into a quick lope, kept her footsteps light so as to not alert the man she pursued. The spring day had drawn people out and the complaints of the pedestrians she weaved through grew loud. The guy glanced over his shoulder, and the edge of his mouth tipped into a grin before he sprinted around the corner.

“Cocky jerk.” She turned the corner, and shouted, “Stop! Police.”

She ran clean and fast, closing the distance between them with little effort. The dealer ducked into an alley she knew to be a dead end. She slowed and put one hand on the butt of her service pistol as she approached. He had his back to her, his hands on his hips as he stared at the brick wall in front of him.

“Philly PD, you’re under arrest. Slowly put your hands above your head and against the wall to your left.” She closed the few feet between them, using her free hand to release the handcuffs from her belt, the other remaining on her weapon. She cuffed him, with practiced efficiency, and then read him his rights before leading him out of the alley, preferring to do the pat down with her partner present.

“Kylee Parker, I’ll admit I daydreamed a time or two about you cuffing me, but it was never in this context.”

About the Author:
Home is where the heart is and Becky makes hers with her very own knight in slightly tarnished armor, their three daughters, son-in-law, two grandsons, and their psychotic cat Jaxon. When she's not busy living her own happily ever after, she's writing about someone else’s.

And here is an interview with Becky, a fun way to get to know her.

1) Tell us a little about yourself, and what inspired you to become a writer.

Hi, I’m Becky and I want to thank you for having me here today. I’m forty-one years young and married to my very own knight-in-slightly-tarnished-armor. We have three girls, the oldest being in her early twenties, married with two boys of her own. I wasn’t inspired to become a writer. It’s more of an “I just am, always have been” kind of thing. I’ve had stories, characters, dialogue, free associating in my imagination for as long as I can remember. It’s as much a part of me as breathing.

2) Tell us what A LOVE RESTRAINED is about.

Kylee Parker is a Philadelphia police officer who, after watching her mentor die in a shoot-out with drug dealers, draws a hard line between right and wrong. A line that is tested when she arrests the bad boy she’d crushed on in high school and he begins courting. Jayson “JD” Donovan works for the most dangerous and most successful drug dealer in the Philadelphia area. He’s also been in love with Kylee Parker since he was a child. Jayson’s not about to let Kylee get away from him this time, not even when their unlikely romance inspires violence and his secrets threaten both their lives.

3) If you were casting the movie version of A LOVE RESTRAINED, who would you choose for the leading roles?

Sam Homan, who is absolutely gorgeous, as my Jayson. I don’t know if he can act, but the look of him is about as close to my image of JD as someone real is ever going to get. And Jewel Staite would make the best Kylee.

4) Tell us about a hidden talent you have that most people don’t know about.

I always, like every time, figure out the big secret, hidden twist, gasp inducing reveal, etc., in each book I read, and every movie and television program I watch. Every time, I’m never wrong, I’m never surprised. And I often share my “theory” with my family and ruin the end for them. And I never feel the tiniest bit guilty because I’m just so happy I was right.

I’m pretty sure everyone says pizza. And oh dear GOD how much do I love pizza. If I wrote sonnets, I’d write one to pizza. But when I really need comfort? Shhh….it’s a grilled cheese sandwich. Don’t tell pizza.

6) Are you an outliner or do you write by the seat of your pants?

Normally, I write by the seat of my pants. I often have an idea of where I think the story is going to go or how it should end, but I let the characters take me along for the ride and we don’t always end up where I thought we would. When/if I get stuck, hit that wall so-to-speak, I’ll plot out an outline which helps me see better where I took that proverbial left turn. Or where perhaps I should’ve turned and didn’t. For Fated Desires, I had to storyboard the entire book in order to finish it. That was a first for me. It wasn’t a bad experience just a very different one. A Love Restrained just plugged along no questions asked, no black holes, no writer’s block; it was just dying to be written.

7) What’s your favorite season and why?

In the past, I’d always say SUMMER. I hate being cold, and I love being in the water (ocean, pool, lake, I’m not picky), and being at the beach. And even though none of that has changed, over the last few years I’ve become gradually more enamored with the FALL. The warm days and cool nights are very appealing. And I like wearing jeans with flip-flops and a tee shirt I can toss a light jacket over if I get chilly. And, of course, football. Love football. And sitting around a fire-pit with good friends and a glass of wine on a clear night. So yeah, fall has been creeping into my heart pretty sneakily.

I’m not sure I can answer this question ‘cause my knee-jerk response was: Well, I’d be dead. And that would totally suck. It’s very much a part of who I am and always have been and always will be, even if I never publish another book/story, that’ll still be who I am.

9) Tell us about anyone famous you’ve met.

I almost met Cuba Gooding, Jr. He was filming a block away from my office a few years back. I was on my way back from lunch and he’s walking toward me, sort of, as he approached his trailer. If I had ran, I probably would’ve gotten to him before he got to the door. And I considered it for a hot second but worried I’d get tackled to the pavement in front of my job by the security I’m sure they had discreetly patrolling the area, I decided against. J I did however meet Frank Gorshin when I was a kid. He was very nice. But I didn’t know who he was until after he’d walked away and my grandmother explained that was the Riddler!

Honest to God, it’s http://thebloggess.com/ Jenny Lawler is a riot. And a lot of her conversations with her husband Victor sound very similar, in tone not content, to conversations had in my house on the regular. I feel like someday her and I are going to be very good friends. And will probably get arrested. But we’ll both have awesome blog posts as a result.

Thanks for visiting with me today, Becky!

Thank you for having me

So happy to feature you, Becky!