My gripes today are more like sorrows, and that's why I didn't post on Friday. We had to have our cat, Burt, put to sleep on Friday, and for the life of me, I couldn't come up with something to be happy about.

Burt was about 12 years old. He was a stray, so we're not sure of his exact age. He started living under our deck the summer of 2000. When we were out on the deck, he'd climb the stairs and jump into our laps and purr, purr, purr. He was such a friendly and sweet little soul. But we already had a dog, so we figured he'd just be a neighbor but not a family member.

Then, the fall began to turn cold. Poor little Burt (yes, we'd already named him, so our fate was already sealed, even though we didn't know it) was shivering and getting skinny. Being the sneaky person I am, I spent time introducing Burt to our dog, Max, out on the deck to see if they were compatible. Max was totally confused about why we'd want to have anything to do with a cat, but he was fine with it if it was what we wanted.

So in November, when the first snowflakes fell, we took Burt in. He was so happy and grateful to be inside. He was the perfect cat...loved to sit on laps and be patted, and also loved to eat! I think that was because he spent time (who knows how much?) living outside on just what he could catch. It took him a long time to realize that now, he would always have plenty of food, a warm house, a lap and many hands to pat him.

Over the past year or so, Burt has begun to have "spells" where he would vomit and not eat. We took him to the vet several times, and they couldn't find anything in particular wrong with him. But since he always got over the spells, we didn't worry too much.

As it turns out, we should have worried, because Burt was developing stomach cancer. In cats it's known as a silent killer, because by the time unmistakable symptoms show up, it's usually too late.

Burt stopped eating last Tuesday night, and wouldn't drink, either. We tried everything, every treat we could find, but nothing worked. He got weaker and weaker, didn't seem to be in much pain, thank goodness, but just fading away. So on Friday, we took him in to be put to sleep. We all went and held him and told him what a wonderful kitty he was, and how much we would miss him. It was quick and went smoothly, but there's a Burt-sized empty spot in my heart now. And my heart was already damaged by the loss of Max in September.

The house sure seems empty, sterile and devoid of life and purpose now... 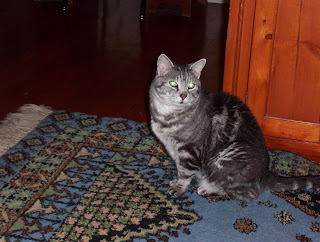 We miss you, Burt.
Posted by Elizabeth Delisi at 1:32 PM