Please help me welcome guest blogger, author J.D. Martins, whose book, “One Night in Madrid,” is available from Tirgearr Publishing. Here’s the blurb: 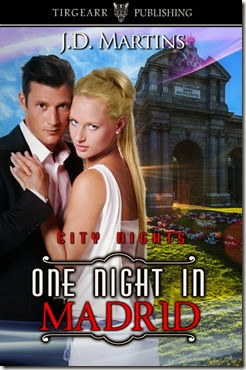 Danny left Dublin for Madrid two years ago, but still scans the crowd in the Irish pubs for the face of someone from home. Though doubtful he'll ever recognise anybody, one evening he sees Aisling, a girl he'd known - or wished he'd known - at university. Beautiful but haughty, she'd always ignored Danny, and though he'd fantasised about making love to her, she'd never so much as smiled at him.

To his amazement, Aisling is extremely friendly when she meets him all these years later and away from home. She is still snobby and condescending, but Danny decides to make her night as enjoyable as he can, hoping for one last chance to impress her and make his teenage fantasies come true. As the sultry Madrid night progresses, mere lust grows into affection, and Danny begins to see her snobbery as something else entirely. Will Aisling see Danny as more than just a way to pass her night in Madrid?

Liz: Tell us a little about yourself and what inspired you to become a writer?

J.D.: I’m afraid I can’t divulge much more than you can read on my bio page on Tirgearr Publishing’s website: I have a long-term partner and have moved around the globe a bit since leaving home after college. I didn’t study English, but I did play around with poetry in my teens - the usual angst-ridden stuff – and joined the English Literature Society for a couple of years.

Liz: Tell us what “One Night in Madrid” is about.

J.D.: It’s about having that rare chance to revisit your past: to encounter someone from your youth in a different context, which gives you the ability to engage in a way you probably couldn’t have if you’d met in your old haunts. This new situation also lets you see the past from a different angle, and see things from the other person’s perspective. In Danny’s case, he was not altogether correct in his assessment of Aisling in his teens, but what he does with that new information remains to be seen. It is in one sense a search for validation, but also a self-examination and acceptance of one’s own flaws.

Liz: If you were casting the movie version of “One Night in Madrid,” whom would you choose for the leading roles?

J.D.: The character of Danny might be well-played by Shia Le Beuf, perhaps, though I sometimes cringe at his roles. The role of Aisling is harder to decide… a younger Claire Danes, maybe.

Liz: Are you an outliner or do you write by the seat of your pants?

J.D.: I’d have to say outliner – very rough outlines that often have to be modified when what I end up writing upsets them, but if I don’t have an idea of what’s going to happen, I generally don’t start to write more than a few thousand words and once that gives me an idea of the characters and possible journeys, I figure that out and write the rest.

Liz: If you weren’t a writer, what would you be?

J.D.: I’d have loved to be a zookeeper. I love animals and that’s one of the reasons I’m going to give ten percent of my royalties to the charity WWF – the World Wildlife Fund. Looking after large mammals like zebras and giraffes would be cool, not to mention the wolves and big cats.

Liz: Tell us about a hidden talent you have that most people don’t know about?

J.D.: I give great massages. I never trained for it, but I’ve been complimented on the quality. I only give massages to girls I’m seeing – I find it very difficult to stop sexual feelings entering the equation – so a very few people have experienced one of my massages, so it’s a well-hidden talent.

J.D.: I don’t normally need much comforting, except after long night drinking, like I used to have in Madrid. There, a beer and a plate of grilled prawns on a terrace would sort me out. When that’s not an option, then I go back to the fast food of my youth – burgers and chips with plenty of ketchup. Chocolate and colacola work in a pinch, though.

J.D.: I love IMDB.com – I think that is what the internet was invented for: reams of info at your fingertips that can then guide your Netflix queue choices! Of course, Wikipedia has made the world a better place, but I use it a lot for writing related research…

To find out more about J.D. and his book, visit these links:

Draining the glass, Danny placed it on the bar, debating whether to have another pint, or stroll home and have a glass of wine while he prepared dinner. The plan was just one pint, but he needed to tell himself that twice; once when he went into the bar and again when he'd finished the drink. He knew if he did have a second pint the hunger might go off him, and he might get chatting to someone. Then he'd end up with a kebab on the way home instead of the chicken curry for which he'd ingredients waiting in his kitchen.

And then he saw her.

She stood quite near, surrounded by a tight knot of people at the edge of the dance floor that had parted momentarily. She wore a cotton summer dress that showed the sweep of her shoulder blades and spine. The dress was floral, red with splashes of black and dark blue. She wore soft brown leather sandals that were almost invisible against her tanned feet. Her toenails were painted red but her fingernails were French polished. A silver or white-gold bracelet hung from her right wrist, and on her left she wore a silver wristwatch, which a discreet look later told him was a Patek Philippe. In her ears she had diamond stud earrings, and on the ring finger of her right hand was a silver ring with a blue stone he couldn't identify.

He didn't see her face straight away, yet something deep inside him said it had to be her.

In college, he'd often stared at this girl's long blonde hair from a few seats behind in the lecture theatre, while far below them a maths professor droned on about matrices. He knew the shape of her head and neck, had observed her tie up that hair, amazed at the beauty of the fine, straight filaments, the way the strands slid like silk over one another, yet held as one tight rope. When she was an infant her mother had clearly decided ever cutting such hair would be a sin, and she’d concurred. She plaited it, put it in a ponytail, tied it up around a clip made of what seemed to Danny like a piece of wood and two chopsticks, or simply a spare pencil. Sometimes it splayed out across her shoulders like a cascade of spun gold. Now it was pulled up in a silver clasp, to reveal the nape of a long, fine neck, and soft-skinned shoulders.

Those shoulders had been bared before, in a hot September of their freshman year, and later, during the intense study month when the cherry blossoms bloomed and fell across the lawns of campus. Danny had fantasised about slipping off that shoulder strap, letting the silky string fall down along her arm, trailing his fingers along her collarbone and ribs and pushing aside the top to expose her breasts….

When she turned around in the bar and he saw her face, Danny instantly searched through his memory to match her visage, and see all six numbers of recognition. It came out a winner. She stared back at him, her brain no doubt doing the same. Although still early, and most—apart from the pre-marriage revellers—were only on their second or third drink, Danny thought she must have been fairly merry already, because as she recognised him she smiled.

She’d never smiled at him before—not in four years of college. Then again, they’d not interacted much. They'd never really talked, never attended the same classes after second year. He'd always told himself she’d never smiled at him because she didn’t know him. Once or twice, of course, she'd turned around, casually, and seen him. But she'd seen lots of others sitting behind her, too. The back rows of the lecture theatre were filled with Danny's friends, who'd varying levels of interest in her hair and the maths lecture; from zero to all-absorbed.

The chance to get to know her had never come around. She'd majored in chemistry, Danny in computer science. He had taken a chemistry class in second year, but she'd always seemed to sit on the opposite side of the theatre then. His gaze had often paused upon her face as he searched through those assembled in a lecture the way he did through the throng of a bar.

She was stunning. Her frame was that of someone who was fit without effort. A swimmer or a gymnast at some point, she had a fine body, breasts the way Hemingway described, wide womanly hips and a behind that eyes or hands could never tire of. She had crystal blue eyes like deep Antarctic ice, and a button nose. Her mouth was perfect. Her teeth had had money spent on them, but her lips were natural; she had a dazzling smile. But before that moment in a Madrid bar, Danny had only received the coldness of those glacial eyes.

Posted by Elizabeth Delisi at 6:14 AM

Thanks for having me by your blog, Liz. I enjoyed answering the very interesting questions you posed.
JD

David, thanks for visiting!