Please help me welcome author Cathy Mansell, who’s here to tell us a little about her new release, SHADOW ACROSS THE LIFFEY. One lucky commenter will receive a copy of her book, so be sure to post your comments! 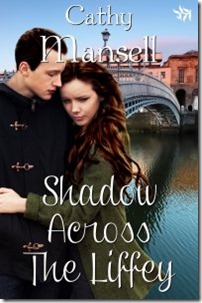 Set in 60’s Ireland, life is hard for widow Oona Quinn, grief-stricken by the tragic deaths of her husband and five-year-old daughter. Struggling to survive, she meets charismatic Jack Walsh at the Shipping Office.

Vinnie Kelly, her son's biological father, just out of jail, sets out to destroy Oona and all she holds dear. Haunted by her past, she has to fight for her future and the safety of her son, Sean. But Vinnie has revenge on his mind . . .

The sun had just come out, and McNally cursed the task ahead of him. The child’s death had touched him deeply. At the station, he had seen tears in grown men’s eyes. This was, by far, the hardest thing he had ever had to do.

He parked the car outside the house with the shiny green door and well-maintained garden, and walked slowly up the path. He hesitated. From inside he heard laughter and music, and it pained him to be the bearer of such shocking news. A lump formed in his throat. He removed his hat and held it in front of him, before knocking on the door.

Oona stared at the uniformed man on her doorstep. ‘That... that’s me.’ She clutched the door. ‘Has, has something happened?’

‘I’m Sergeant McNally. There’s been an accident. May I come in?’

Connie joined her in the hall, the smile slipping from her face.

‘Are you a relative?’ he asked.

He thought Oona was going to faint but her sister’s hand guided her towards the living room. A moment later, the two women sat on the sofa clutching hands.

Oona nodded. She was trembling. McNally could see a glimmer of hope in her big brown eyes.

‘I’m afraid your husband’s been in a serious accident, Mrs Quinn.’ He saw all her fears encapsulated in that one terrible moment as he delivered the news.

He swallowed, barely able to answer, and then he nodded.

‘We found his driving license.’ He gripped his hat. How could he tell her about the little girl?

‘My little girl! What about Jacqueline?’ she cried out. ‘Where is she? She’ll be frightened. I must go to her.’

‘I’m afraid there was nothing we could do, Mrs Quinn. It all happened so fast.’

‘God! No! Not my little girl! Not Jacqueline!’ She was shaking hysterically. ‘Connie! Tell him; tell the Sergeant he’s got it wrong. Please, Connie.’

‘They’re not, not both of them,’ Connie pleaded, her face distraught.

‘Everything that could possibly be done was done at the scene. A drunk driver coming off the boat caused the crash. He’s dead, too. I’m afraid I was a witness. I’ve spoken to a number of other eye witnesses who saw the white van veering erratically before hitting your husband’s car.’ He swallowed again. ‘There was nothing your husband could have done, Mrs Quinn. I’m so sorry. If it’s any consolation at all, they were both killed instantly.’

‘God Almighty! No! No!’ Oona rocked back and forth. Her breath was coming in huge spasmodic lurches as if her chest was about to explode. He had seen people grieving before, but to lose a child... He wished this was all a dream and that he hadn’t been a witness. He sat with his head bowed, turning his hat round and round in his hands.

Oona stood up, shaking uncontrollably. Before he could do anything, she collapsed onto the floor. 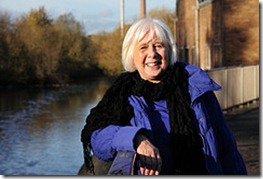 Cathy is an experienced writer of romantic fiction. Her early work was competition short stories and articles published in national magazines. She was Editor in Chief of the Leicestershire Anthology, ‘Taking Off’, a book promoted and supported by the Arts Council UK.

In recent times, Cathy has turned to writing full-length novels that are set in Ireland/England and America in the 1950s/60s. Her debut novel, SHADOW ACROSS THE LIFFEY, is published with Tirgearr Publishing and weaves her affinity with Dublin and Leicester.

Having lived her childhood years in Ireland, all of her work has that touch of authenticity. They depict the lifestyle and hardship of Irish families in those days, with the passions and emotions of her characters, who are wound up in intricate criminal plots, mixed with illegitimacy and the desperate and tragic loneliness of widowhood, contrasting with the happiness when love comes calling once more.

Readers of Cathy’s novels are transported to a distant time, with page-turning tension, having tears and laughter in equal measure.

All of this is borne out of Cathy’s own early experience of widowhood, alongside the trials of bringing up a family as a lone parent in the 70’s. In addition, finding love again with Dennis, her husband and most ardent supporter.

Nowadays, Cathy lives in rural Leicestershire where she writes daily in her ‘Loft Study’ overlooking fields and trees.

Cathy is giving away a copy of SHADOW ACROSS THE LIFFEY to one lucky reader. To enter, leave a comment here. Good luck!

Thanks to Cathy for being my guest today.

Posted by Elizabeth Delisi at 12:33 AM

You had another great review for Shadow Across the Liffey, Cathy --

Unput-downable, indeed! Lots of tension in this great story.

Thoroughly enjoyable read. This book takes you on a journey of loss, love, revenge and romance. Looking forward to more from this author.

This captivating novel sounds profound and memorable. This family saga would be enjoyed greatly and the era is one with which I am familiar. Thank you for this chance.

I enjoyed this great feature and learning about the author and her background. This book and the setting is meaningful and special. Many thanks. elliotbencan(at)hotmail(dot)com

Great excerpt. I enjoy reading books by authors I have not read yet.

For your kind comments.
They are very much appreciated.

So pleased that you enjoyed Shadow Across the Liffey Samantha and that you will come back again and visit.

Hi Ingeborg. thank you for stopping by. I hope you do get read the whole book and enjoy the story.
Cathy

Traveler thank you for your lovely comments. It is an era I love writing about. I hope you will download a
copy and enjoy reading the story.
Cathy

Hi Petite. So pleased you enjoyed reading the blog. thank you for
your comment.
Much appreciated.

Hi Joan.
So please you enjoyed the excerpt
of Shadow Across the Liffey and that
you will read and enjoy the whole book.
Thank you
Cathy

Wonderful excerpt, Cathy! I look forward to reading it.

Hi Dellani, lovely to hear from you. Thanks for your comment.

To everyone who left comments
on Elizabeth Delisi's blog, a
big thank you.

The winner of a free copy of
Shadow Across the Liffey goes to
Samantha Russell for her heartfelt and helpful comment.
Congratulations Samantha.
Cathy Mansell