Please help me welcome my guest, author Charlene Raddon, who will tell us everything we’ve wanted to know about pioneer sod homes. Read all the way through to find out about her special giveaway.
Homes of the Pioneers 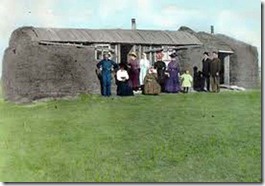 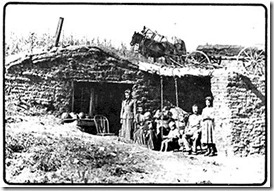 Dugout
Dugout, 1850-1920 — Dugout dwellings were, of course, partially subterranean, dug either into level ground--up to approximately six feet deep--or, more commonly, into a hillside, preferably south-facing, to capture sun in the winter. Floor dimensions of 12’x 12’ were common. A wall of log, earth, stone, or sometimes brick was sometimes built above ground around the perimeter, high enough to provide adequate head room. The roof might be flat, sloped, or a have a shallow-pitched gable. The roof consisted of flat boards or heavy wood poles spaced evenly as rafters. Willows or other saplings were placed between poles and covered with straw or bundles of brush. A thick layer of dirt made the final layer. Such a roof did little good in heavy rain, and often caved in, especially if livestock was allowed to roam freely on top of the roof. 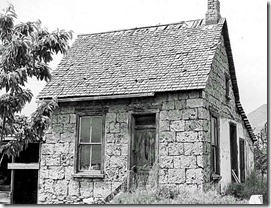 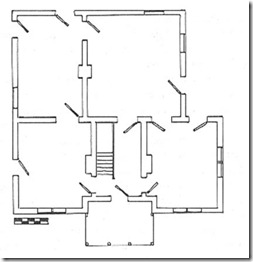 Central Passage House
Central Passage, 1847-1900—A central-passage house is a modification of the hall-parlor type, with a passage or hallway (usually containing a staircase) between two square or roughly square rooms. One, one-and-a-half, and two-story examples of the house have been recorded, and both three-and five-bay forms are common (bays are window or door openings). From the outside, the placement of internal chimneys flanking the central hall identifies it as this type of house.
Pair House, 1853-90— The pair house has a distinctive three-room-wide floor plan. It differs from the central-passage type by the central room being more than a passageway. Usually it is either the kitchen or the living room. This one also was built with one, one and a half and two stories, with either gable-end or internal chimneys. The paired internal chimneys (more widely spaced than central-passage chimneys) identify it as a pair house. Usually has three or five bays.
Double Pile, 1847-80— The double-pile house was two rooms deep, a regional modification of the Georgian detached house (which has two rooms on either side of a long central passage.) Other double-pile forms extend the hall parlor, pair house, and double-cell types one unit to the rear.
Side Passage/Entry Hall, 1847-1920— This house has a square or rectangular plan with an entrance passage on one side of the main floor, giving the house a distinctive asymmetrical appearance. The side-passage house is one and a half or two stories and was used in styles ranging from the Greek Revival to the Prairie School. The side-passage form originated as an 18th-century variant of the Georgian detached house—two rooms on either side of a central passage.
Saltbox, 1847-70— The saltbox is defined mainly by its roof shape rather than its plan. This house has a two-story front section and a one-story extension, or outshut, to the rear. The entire house is covered by a long sloping roof, with a continuous, unbroken roofline, giving it the shape of an old-fashioned salt storage box.
Temple Form, 1847-75—The temple-form house has its entrance in the narrower side of the house, usually under the gable end of the roof. These houses may multiple storied, and may use different floor plans, including the double-cell and side-passage. There may be wings on one or both sides. By 1850, several new types, such as the cross-wing and cruciform, were becoming important new forms.
Cross Wing, 1880-1910— The cross-wing house consists of two wings placed at right angles so the floor plan resembles a “T” or an “L.” The stairway is often situated in the side wing. Usually one and a half stories tall, although some are two stories. Smaller one-story examples were often called simply “T-cottages.
Shotgun House, 1875-1910— The shotgun house is narrow, one story tall, one room wide, and two or more rooms deep.  The narrow gable end faces the street and typically contains a single entryway and window.  Each room is placed behind the other in single file, with no hallway.  The roof ridge is perpendicular to the street. 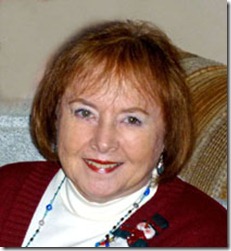 Charlene Raddon
I hope you found this blog informative and useful. Please leave a comment and your contact information for a chance to win my soon-to-be released e-book, TO HAVE AND TO HOLD, in which the heroine lives in a dugout she dug herself with a broken shovel after her home was washed away in a flash flood. January 24 was the release date for this book.

I wish my great aunt was still alive. I could ask her which of these soddies she lived in. All I know is that it would have been around 1890 and it had several rooms, as one was dedicated for the kitchen/eating area. I believe there were at least three bedrooms as the parents had their room and the boys and girls had their own shared rooms, boys in one, girls in the other. Interesting times, to be sure!

So much great information! Thanks, Charlene. I've always wondered how I would have done living in a pioneer house - probably not as well as I'd like to think.

Never in a million years! If anyone tells me to West, I'm headed to the Westgate Mall!
So interesting. It's research like this that makes your books feel immediate and alive:)

Thanks, Kemberlee, Alison and GA. I doubt I would have done well in a sod house either unless it was plastered. I have photos of one that is and you can't tell it from an older modern home. GA I think I'll join you at the mall. Thanks for stopping by.

I learned a lot today from your blog about dod houses. Thanks for the info. I"m not sure I would have done well living in one...I don't get along with dust very well.
JFWisherd(a)aol(dot)com

Very interesting post. We are very lucky, houses sure have come a long way.

I love the photo of the horses and wagon on top of the sod house. Very interesting info on the types of houses. I read To Have and To Hold years ago. It's a fascinating story!

Interesting blog. My grandparents had a dug out cellar on their farm back in Colorado and as a kid I never liked to go down there..it smelled like dirt. and I was always afraid snakes lived in it. I think the sod houses would have smelled that way too ....especially if they got wet. Your book sounds interesting.
JWIsley at aol com

Jakie and Ingeborg. thank you for dropping by and commenting. There's a lot to tell about pioneer homes. My blog could have been much longer.

Thanks, Janie. Glad you dropped by.

WINNER!!!
Congratulations to Joye who is our winner for this blog. Joye please contact me at charraddon@pobox.com so I can find out what format you want your e-book in. Also please confirm the address you want your gift card sent to.
Thanks for visiting and leaving a comment.

Congratulations, Joye, and thanks to everyone who visited and commented.

A special thanks to Char, my guest! It was great to have you here.