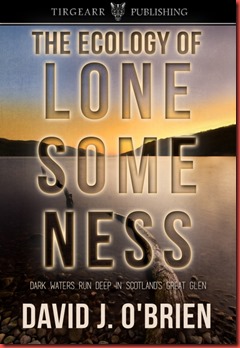 Kaleb Schwartz isn't interested in the Loch Ness Monster. He'd enough cryptobiological speculation about Bigfoot while studying the Pacific Northwest forests. He's in Scotland's Great Glen to investigate aquatic food webs and nutrients cycles; if he proves there's no food for any creature bigger than a pike, then so much the better.

Jessie McPherson has returned to Loch Ness after finishing university in London, hoping to avoid the obsession with its dark waters she had when younger and first discovered lonesomeness. She knows any relationship with a scientist studying the lake is a bad idea, but something about Kaleb makes her throw caution to the depths.

When Kaleb discovers Jessie's lonesomeness refers not just to the solitude of the loch, he's faced with an ecological problem of monstrous proportions. Can he find a way to satisfy both the man and the scientist inside himself, and do the right thing? 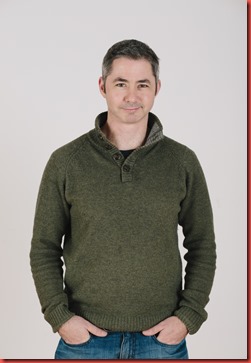 Tell us a little about yourself and what inspired you to become a writer?

Well I was born and raised in the suburbs of Dubin, Ireland, and studied science in UCD. I have a degree in Environmental Biology and a PhD in Zoology. I studied deer, one of my favourite animals. I still dabble in deer management, but for money I mostly teach. I met a girl during my doctorate who was on her Erasmus year in UCD, and I went to Madrid when I was finished instead of going off to continue academia. I found I liked teaching and teach science and English now in Pamplona, where we've ended up.

I started writing poetry when I was a teenager. I was given a little notebook and I just started scribbling in it - an addiction to stationary started me off, I suppose!

I always liked reading, but I didn't write any stories until I was around sixteen. One of them was very long, and I kept expanding it. Over the course of a few years it became my first novel, Leaving the Pack. I think my style of writing is better suited to novels than to stories. I can condense ideas in poems, but once I have a character or two, it takes me a lot of time to really get to who they are, and it seems a waste to just give them a story when so many deserve a novel.

Tell us what The Ecology of Lonesomeness is about?

It's about the urge to find wonder in our natural world, to rewild our environment with the animals and forests that they should have, and would have if it weren't for people killing and cutting them. It's also about the need to find companionship and love, and taking chances on relationships which might seem doomed when only viewed logically, with the head rather than the heart. The balance between keeping secrets and revealing ourselves to loved ones, and trusting someone with secrets is also a theme, and how much we are willing to sacrifice of our own life-plans and ambitions in order to hold on to love.

If you were casting the movie version of The Ecology of Lonesomeness, who would you choose for the leading roles?

I wish I knew more of these young actors and actresses that are in their twenties. If Kelly McDonald were still in her twenties, she'd be perfect as Jessie. In fact, I thought of Kelly McDonald's voice when I wrote Jessie's dialogue. Carey Mulligan has got the right looks - with black curly hair, if she could pull off the accent,.

As for Kaleb, well, Nicholas Hoult would be around the right age and build - blue eyes, tousled dirty-blonde hair.

Are you an outliner or do you write by the seat of your pants?

I try to be an outliner, but I tend to write scenes as they pop into my head and then try to stitch them together later. Most of it fits into the general outline of beginning middle and end that I have in my head, but often the middle is a swamp of quicksand and mush that I have to whack my way through with a machete before it makes sense. A few scenes never fit, like jigsaw pieces that belong to a different puzzle and are in the wrong box. So they get put away into the slush file. Then I make pieces that do actually fit properly instead.

If you weren’t a writer, what would you be?

I think I'd be a teacher with lots of free time to go hiking and do more gardening. But really, I can't imagine myself not writing something, especially poetry, which I still (have to) do.

Tell us about a hidden talent you have that most people don’t know about?

I don't know if it is a talent, but I'm a good listener and, just like my characters in this novel, I can keep a secret, forever.

Comfort, as in after a long night, would be diet coke and macdonald's quarterpounder and fries. It's a left-over from my youth, when I worked in a restaurant for a summer at the age of sixteen. I hardly ever eat there now, except when I am in Ireland on holiday. In Spain the food options are much better. As a diabetic, I have too much guilt to really enjoy the Ben and Jerry's ice cream that would be nicer...

I really like Upworthy.com. It gives snippets and links to videos that the traditional media usually ignore regarding social justice and science and other more quirky stuff. The idea is that it spreads links to stuff that was uploaded to the Internet to edify us, for a good reason. I have it on my Facebook feed and I often share the stories.

To find out more about David and his book, visit these links:

Posted by Elizabeth Delisi at 4:57 AM

Thanks for having me on your blog today, Liz.

Happy to have you here, David! I do think being a good listener is a talent, wonderful to have as so many people don't.