Please help me welcome today's guest author, Dianne Noble! Tell us a little about yourself and your book, OUTCAST. 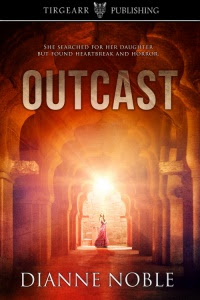 The first time I ever went to Kolkata (then known as Calcutta) was over half a century ago. I knew nothing then of the infamous Black Hole where British people were imprisoned in a tiny dungeon by the Nawab of Bengal and, allegedly, 123 died by suffocation. Or of the Calcutta Cup which is awarded to the winner of the Scotland/England game in the Six Nations Rugby. It started in India and the trophy was made there with melted down silver rupees and decorated with an elephant and cobras.

I sailed to Singapore with my family when I was seven and the first place we stopped was Port Said in Egypt where there were snake charmers and men wearing what looked like nightgowns. Coming from the grey deprivation of post-war Britain the hot sunshine and vivid colours were intoxicating, and I was beside myself with excitement when we travelled along the Suez Canal. Walls of sand on both sides of us,  and men in robes riding camels. We stayed a while in Yemen and also Ceylon (now Sri Lanka) but there were no calls at Indian ports.

Three years later the canal was closed and we made the journey back to England, in December, on a Hermes propeller plane. It took almost three days with stops at virtually every country on the way for re-fuelling. There was an emergency landing in Italy because the wings had iced over and the additional weight was dangerous. Compared to today when I can fly direct to India from a local airport in great comfort other than being a bit cramped, air travel in the 1950s was basic. Cabins were not pressurised, the engine noise was deafening and flights were at low altitudes which meant no escape from turbulence. We were supplied with sick bags made from heavy duty paper and they got a lot of use.

One of our stops was Calcutta, at Dum Dum Airport, so called because it was the birthplace of the infamous bullets which spread on impact to cause maximum damage. It was night time and hot, the humid air thick with whirring insects. We were offered black sausage and fried eggs for supper but few were able to stomach it. My kid brother, only three, screamed in fright when he was taken to a hole in the floor toilet and held over it. He – and I – found our bladders totally unable to co-operate.

Many years later, as an adult, I went back to Kolkata and spent several months teaching English to the children who lived on the streets. The place had changed so little in all that time, other than to fall into further dilapidation. When I was first in India, in 1957, India had been independent for just ten years and most of the infrastructure had been intact. Now, many of the city’s buildings crumble like stale cake, neon lights reflect on lakes of sewage, the roads and railways are at breaking point but there’s still something magical about Kolkata – and all of India – which keeps me coming back.

EXCERPT
A week passed and although her thoughts often flew to Priyanka she tried to concentrate on the remaining girls. The fuzz on their scalps was developing into hair, giving their little faces an elfin look. She could see them now as individuals. Sanghita and Aanya were very alike with pretty faces and long lashes. Khusboo, skin much darker than the others, remained withdrawn. Pinky, the cheeky one, was of a sturdier build than the others and with a manner which Rose’s Irish grandmother would have called bold.
Rose and Maria had a routine now, took it in turns to teach writing in the mornings, while the other shopped, went to the Internet Café or the ATM for cash. At lunchtime they shared the cooking and afterwards, while the girls slept, they swept the floors and did the washing in a bucket, before pegging it out round the back. It always dried before dusk but smelt of exhaust fumes and worse. Rose missed the sound of washing snapping on the line in a good wind, and the fresh, outdoors smell when she brought it in. When the girls woke it was talking time, reciting parrot fashion - ‘Never did me any harm,’ said Maria – numbers, colours, parts of the body, animals from badly drawn pictures.
‘Pity I couldn’t grab the books from the orphanage,’ said Maria with a sigh. ‘Wasn’t fast enough.’
And then it was playtime. Maria showed them how to throw the tennis balls against the wall and catch them. Rose cut off a length of rope and demonstrated skipping.
‘My God,’ she said, gasping for breath, ‘didn’t realise how unfit I was.’ She stopped, bent over, while the girls giggled. ‘OK,’ she said. ‘You try.’ She cut the rest of the rope in sections and watched as they tripped, fell, cried, sulked, until with shrieks of joy they mastered it.
‘Look, Aunty, look!’
All except Pinky who didn’t seem to have any idea of rhythm. She stamped away and kicked a ball up and down the room.
Rose sank to the floor and wiped her face.
‘Is it me, or is it hotter today?’
‘Middle of Feb and coming out of winter - it’ll get warmer every day now. And I’ve only got three weeks visa left which means you must have five.’
Rose nodded slowly. If she planned on remaining in Kolkata, overstaying her visa, she’d have to make a trip home fairly soon.
‘The next volunteer,’ she said, ‘when’s she coming?’
‘A couple of days before I leave, so we can do a handover. Have you thought what you’re going to do, Rose?’
‘I’m stopping here.’ She didn’t know she’d decided until the words left her mouth, then felt relief. ‘Yes. I’ll go to the airline office tomorrow. A week at home will be enough, sort things out with Hannah, set up a contract for her…’
‘What about Ellie?’
Rose shrugged.
‘When I got that email about Finola being pregnant I told her she’d have to make the best of it.’ She sighed. ‘She’s twenty and a mother to be. She’ll have to sort herself out.’
‘You’ll want to see your first grandchild, though.’
Maria’s voice was gentle and tears pricked behind Rose’s eyes.
‘Of course…but I can’t do both.’
‘So you’ve chosen the girls?’
‘It seems so. Wasn’t a conscious decision, it just appeared.’
***
She lay awake that night, making plans, too excited now to sleep. Even with the café overheads and Hannah’s wages the takings would be more than enough to fund this place. And maybe, in the summer when the income rocketed, maybe she’d be able to find better premises here, have a fridge and more rooms. And when she came back from her trip home, she’d bring posters, flash cards, books and a radio for the girls so they could dance. It would have to be a wind up one because of the erratic power but she’d find one. Her mind was so full that the grey light of dawn was beginning to filter through the shutters when she at last fell asleep.
Woken by a knock at the door. She jerked upright on her mat, pulled away the net shrouding her face and looked around. No sign of anyone, all the mats neatly rolled away. The sound of splashing from the bathroom then Maria’s head appeared.
‘Good morning at last. Thought you’d died.’ With a sunny smile she waved towards the door. ‘It’ll be the man for the rent.’
Rose scrambled to her feet, retrieved her money belt from beneath the mat and staggered to the door, pushing her hair out of her eyes, yawning hugely. The wood felt hot from the sun beating down on it. She opened it and heat rushed in, wrapped itself round her bare legs. Nobody there. Tutting, she squinted up the alley one way and then the other. The usual traffic, people, a motor bike. As she began to close the door she heard a mewling sound, like a cat. Looked down to see a baby girl at her feet, red and naked.

BLURB
Rose leaves her Cornwall café to search for her daughter in the sweltering slums of Kolkata, India.
In the daily struggle for survival, she is often brought to her knees, but finds strength to overcome the poverty and disease, grows to love the Dalit community she helps.
But then there are deaths, and she fears for her own safety.
Her café at home is at risk of being torched, and finally, she has to make the terrible choice between her daughter and the Indian children.
Buy links:
Amazon (universal link): http://mybook.to/outcast
Barnes & Noble: http://www.barnesandnoble.com/w/outcast-dianne-noble/1123400384
iBooks UK: https://itunes.apple.com/gb/book/outcast/id1083130105?mt=11
iBooks US: https://itunes.apple.com/us/book/outcast/id1083130105?mt=11
Kobo: https://store.kobobooks.com/search?Query=9781311691910
Smashwords: https://www.smashwords.com/books/view/614347?ref=cw1985 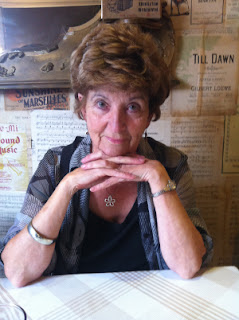 I think I became a reader before I could walk. While other people had childhood memories, I amassed a vocabulary. I was born into a service family and at the tender age of seven found myself on the Dunera, a troopship, sailing for a three year posting to Singapore. So began a lifetime of wandering – and fifteen different schools. Teen years living in Cyprus, before partition, when the country was swarming with handsome UN soldiers, and then marriage to a Civil Engineer who whisked me away to the Arabian Gulf.

Most of the following years were spent as a single parent with an employment history which ranged from the British Embassy in Bahrain to a goods picker, complete with steel toe-capped boots, in an Argos warehouse. In between I earned my keep as a cashier in Barclays, a radio presenter and a café proprietor on the sea front in Penzance.

Ten years ago I flew to Kolkata, West Bengal as a volunteer to teach English to street children in the slums. I stayed for several months and kept a journal, primarily so that I could download the horrors I saw daily. A kind of de-briefing. Not that it was all bad, the children had a huge capacity for happiness which was truly humbling.

It was this diary that grew into a novel and I was thrilled when Tirgearr Publishing brought it out as an ebook March 2016. It has already attracted a number of five star reviews. ‘A richly told tale, emotive and evocative.’ ‘Has it all – humour, pathos, spirituality.’

I have two further novels in the pipeline, Oppression, which is set in Cairo, Egypt and tells the story of a forced marriage and One Hundred Hands Outstretched, again based in India.

My website www.dianneanoble.com promises ‘Atmospheric Settings, Women under Pressure’ and this is what I try to deliver. If you are a fan of books by Victoria Hislop or Rosie Thomas you’ll probably like mine.

My travels have taken me to China, Egypt, Israel, Guatemala, Russia, Morocco, Belize and my favourite place, India. I keep copious notes and constantly dip into them to ensure my settings are authentic.

I live alone, when not travelling, in a small Leicestershire village. A happy life for me is writing or reading – with breaks for chocolate and mugs of tea – and occasional visits to the theatre.

Posted by Elizabeth Delisi at 4:00 AM

Glad I could host you, Dianne. Your book sounds amazing!