S is for SINCE ALL IS PASSING

The letter S gives me an opportunity to tell you about another book of mine, SINCE ALL IS PASSING. It’s a little different from my other books in that it’s more a suspense with a little romance, than romance with something else. ;-) 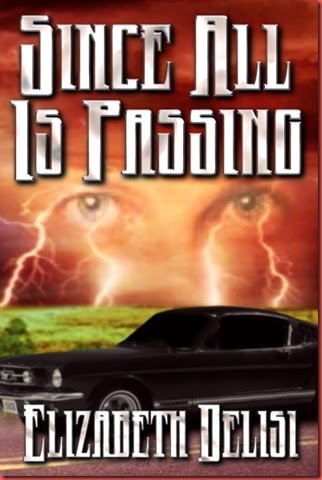 When Marie Kenning witnesses the kidnapping of a child, she relives the horror of the death of her own child and husband.

Officer Chris Whitley takes on the case—and an interest in Marie—but evidence quickly indicates the child is dead.

Days later, Marie stumbles across the kidnapper and his very-much-alive victim. Unable to convince the man she loves of the truth, Marie sets out alone on a dangerous cross-country mission to save the child.

…All the windows in the motel were dark except for the room right across from hers. Shadows played on the curtain; one large, one small. Marie wondered if they, too, were having trouble sleeping.

The light went out in the room across the way. Disappointed, Marie was about to let the curtains fall back into place when the door to the room opened. A man emerged, carrying a small child in his arms. The child appeared to be struggling, but he held her in a firm grip.

The man walked to a dark car and opened the passenger door. He turned to shove the youngster inside and as he did, Marie caught a glimpse of the little girl’s face, revealed by the pale moonlight. Her mouth dropped open in shock. It was Rebecca!

Marie’s mind stumbled, trying to make sense of what her eyes were telling her. Could it really be Rebecca? It had been five long days since the kidnapping, and she’d imagined the child’s face before. Was this just another bad dream? Pinching her cheek, she stared at the car. It was hard to tell in the watery moonlight, but it appeared to be a dark-colored Mustang.

The man strode around to the driver’s side. He opened the door and Marie was galvanized into action. She couldn’t let him get away again! She had to stop him, and do it right this time.

Not bothering to grab her robe, she unbolted the door and jerked it open. Tripping over the well-worn welcome mat, she staggered toward the car.

Receding red taillights mocked her. “Stop!” Marie cried, her bare feet slapping the wet pavement as she pursued the Mustang already shrinking into the distance. “Come back!”

It was too late. Rebecca was gone again...

For more information, to read reviews, and to order your own copy of SINCE ALL IS PASSING, please visit Amber Quill Press here: http://www.amberquill.com/store/p/209-Since-All-Is-Passing.aspx

Here’s hoping you enjoy it!

Posted by Elizabeth Delisi at 1:06 PM

Love this book! Everybody needs to read it as soon as possible if they haven't already.

Thanks, Kim! I'm so happy you liked the book and are willing to say so!