Her latest book, MISFORTUNE OF VISION, is a fascinating historical novel set in 12th century Ireland. Here's the info: 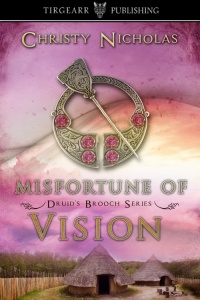 .~ Prophecy can be dangerous ~
.
In 12th century Ireland, Orlagh has been Seer to her king for forty years. He doesn’t want to hear her prophecies of war and destruction, and dismisses her efforts to warn him. Therefore, she is determined to fulfill her own quest: to find a worthy heir for her magical brooch.
.
In the course of events, she must pass judgment on a thief, escape a Norman war camp, and battle wits with a Fae lord. She receives some prophecy of her own and enlists the help of a grizzled old warrior, who happens to be a long–time friend.

In the morning, the priest had left. A small bag sat next to the cot containing more bread, cheese, and two wizened winter apples. Saying a prayer of thanks for the Father, Declan put on his still-damp clothing and laid the robe on the cot.
The room echoed in silence. He didn’t want to leave the beautiful solitude. Could he have succeeded as a man of the church? He felt certain he didn’t have a vocation, and he’d have had to learn how to read. No, priesthood was never for him. Still, priests seldom starved, and they had a warm place to sleep every night. There were worse jobs.
Declan peeked into the other chamber and saw that Father Mac Cana lived simply. A silver crucifix on the wall and a washing basin were all that distinguished it from his own night’s abode. He stared at the crucifix. The silver looked valuable. He could trade that in for lots of food. No, no, that was despicable. He couldn’t think of such things. With a slam of the door, he left the chapel.
Strangfyorthe. Such a foreign name. Should he go to Rǫgnvaldr and hope for the best? Or should he strike out on his own? He hadn’t done so well on his own so far, but it had only been a few days. Surely he could do better if he tried. But winters in northern Ireland were long and bitter. His best prospect lay in Strangfyorthe.
Declan shouldered his bag and walked the north road. It had iced over in the night, making the footing slushy and treacherous. Walking on the grass beside the road went easier, but presented more obstacles. It took him twice as long as it should have to get there.
When he approached the Ostman village, the first thing he noticed were the buildings. They were of a different configuration from Irish buildings. Large rectangular halls topped with elaborately-carved roof dragons made Declan stop and cross himself. Demonic grimaces on the creatures made him want to turn around again and make haste to the safe little chapel.
Most of the farm buildings in Declan’s life were roundhouses topped with thatch. There were larger halls, such as a Chief’s ring fort, but still based on a circle. How best to defend a fort on a hill but from all sides? Hills were round.
But these Ostmen built long, straight halls with wooden roofs. Brightly painted shields lined the longest hall. Is that where he should go to find Rǫgnvaldr? Or should he search out someone else? He had no idea what he should do.
He had just turned around to head back the way he came when a woman approached.
“Are you the new Singing Man?  Rǫgnvaldr said you would be here hours ago.”
Declan turned back to see a wide-shouldered woman at least a foot taller than him. He blinked up and looked into her pale blue eyes and nodded. “I’m sorry, my lady. The road turned icy.”
“Hmph. Come, then. Into the hall. Have you an instrument?”
He shook his head and his stomach dropped again. He’d never had the luxury of practicing on such a thing. That would have been the height of folly and wasted time to his parents.
“You’d best sing sweetly then, to make up for the lack! Quick now.” She strode to the largest building and he scurried after her. 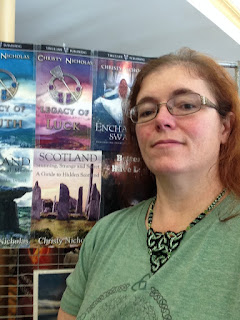 Christy Nicholas, also known as Green Dragon, is an author, artist and accountant. After she failed to become an airline pilot, she quit her ceaseless pursuit of careers that begin with ‘A’, and decided to concentrate on her writing. Since she has Project Completion Disorder, she is one of the few authors she knows with NO unfinished novels.

Christy has her hands in many crafts, including digital art, beaded jewelry, writing, and photography. In real life, she’s a CPA, but having grown up with art all around her (her mother, grandmother and great-grandmother are/were all artists), it sort of infected her, as it were.

She wants to expose the incredible beauty in this world, hidden beneath the everyday grime of familiarity and habit, and share it with others. She uses characters out of time and places infused with magic and myth.

Combine this love of beauty with a bit of financial sense and you get an art business. She does local art and craft shows, as well as sending her art to various science fiction conventions throughout the country and abroad.