Today my guest is Abbey MacMunn, author of TOUCHED. Help me welcome her! 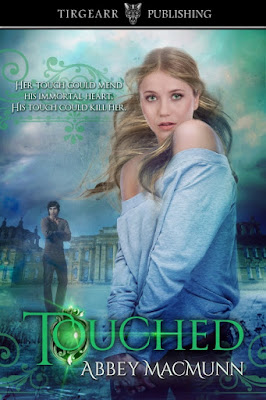 When inquisitive antique dealer Cami Wilson learns she’s the revered offspring of an immortal mother and a mortal father, it’s not just her hybrid status that has her all flustered. The title comes with her very own super-sexy guardian.

Jaded immortal Joseph Carlisle has only one thing on his mind; his sworn duty to protect the hybrid from those who wish her harm. Anything else would be complicated. That is until they meet.
Chemistry sizzles between them but there’s a problem—the hybrid’s curse. Cami’s touch, skin to skin, proves near fatal to her and all immortals, Joseph included.

But the fated lovers discover her curse is the least of their concerns when a friend’s deadly betrayal threatens to tear them apart forever.

Author Bio:
Abbey MacMunn writes paranormal, fantasy and sci fi romance. She lives in Hampshire, UK with her husband and their four children. She is a proud member of the Romantic Novelists’ Association.
When she’s not writing, she likes to watch films and TV shows – anything from rom-coms to superheroes to science fiction movies.

Excerpt:
Joseph wore a faded, black T-shirt which clung to his well-toned pecs, and hip-hugging, worn jeans. A silver chain around his neck and two leather bracelets hinted at a ‘bad boy rock star’ image that somehow didn’t befit his formal, authoritative manner.

Cami swallowed. Just her type. Not that she’d dated many bad-boy rock star types, but still...

Among her disastrous relationships to date were Bad-Breath Barry from the village Post Office, who’d been sweet but oh so boring, and still lived with his overbearing mother—always a bad sign. And Shaun, the prematurely-balding, assistant manager at Morrisons—a total wet lettuce who thought himself God’s gift to women and whose only interest was getting his leg over. Sex with Shaun had been… ahem, experimental; what she’d ever seen in him escaped her now. But living in a tiny village with the average age of its frail population working out at seventy-two, the pickings were slim to say the least.

Funny thing was, she didn’t know she had a type until now. And she was looking right at him.

Joseph scrubbed the back of his neck and massaged his shoulder. She imagined those massive shoulders of his were stiff as a board by the way he held them rigid all the time.

She zeroed in on the tattoo on Joseph’s wrist and followed the thick veins snaking up his forearm. The way his muscles flexed hypnotised her, quickened her pulse. The guy oozed sex appeal with his Mr. Dark and Moody persona. If only he cracked a smile now and then.


Posted by Elizabeth Delisi at 6:00 AM

Abbey, so happy to have you here today. TOUCHED sounds wonderful!

Thanks for having me!