Today I welcome guest blogger Elaine Dodge, author of the historical romance, HARCOURT’S MOUNTAIN. Read on to get to know her and her work!

I met someone famous once. And for the life of me I can’t remember his name. I could look it up but frankly, I don’t think he deserves it. I was scarred for life. It’s his fault I no longer wear high-heels.

I was a teenager and you know how easily breakable they can be. I was trying so hard to be grown-up and had bought these grey, 4 inch high-heeled shoes with money I’d made working Saturday mornings at the local chemist’s. The trouble began on the night my family and I went to the theatre. I loved the theatre. As a very young child I’d believed that the people who came on in the dark between scenes, all dressed in black, were theatre elves that lived behind the curtains and moved things around on stage for the humans. Like the elves in the story of the shoemaker. Yes, I know, but give me a break, I was only a child. Albeit one with a troublesome imagination. I didn’t have any imaginary friends. I had imaginary lives.

As a family, we’d watched every episode and the movie of “All Creatures Great and Small” and the star of the film had arrived in Zimbabwe to play the lead role in the play, “Whose Life is it Anyway?” There was no question; we were going to see it. It was the perfect opportunity to dress up and wear those shoes.

The play itself was excellent. After the final curtain, Dad suggested that we try and get backstage to meet the star. There was no hanging around at the stage door for us. Dad took us up the stairs on the side of the stage and accosted the man as he was making his way into the wings. At the best of times my father has a rather forbidding aspect and when he’s being determined he can give Captain Ahab on a bad day a run for his money. And we’re a tall family. I was the shortest person in it and I’m five feet ten. My brother, who is younger than me, always called me his little sister. So, to be fair, we probably terrified the poor man.

It was as I was crossing the stage that I realised things were not going to go well. He looked firstly annoyed. How dare these colonials accost him like this! Had they never heard of stage etiquette? Then terrified. Oh my great aunt! They’re huge! And then, quite frankly, vicious. But it was when I stood next to him that things got ugly. If he’d stood on his tippy-toes he may have reached the five foot mark. With my prized heels on I was six feet. “Good grief!” he said. “You’re a big girl!”

I threw the shoes away that night. It was the one and only time I’d worn them. I wear takkies (tennis shoes/ sneakers) most of the time now. Not that I don’t love a fabulous pair of shoes and will wear them with abandon if I have anywhere to wear them to. I just don’t wear anything with a stiletto. And I drive a scooter, so footwear choices are pretty limited.

But as a writer, famous people, and I hope to be one, one day – as a best-selling author not a psychotic killer of arrogant actors under five feet tall, I hasten to add – …where was I? Oh yes, famous people. They’re usually in the forefront of our, alright, my mind when I create characters for my books. Take Luke Harcourt from “Harcourt’s Mountain” for example. Creating him was easy. I just wrote Daniel Craig. I have a terrible crush on the man. And best of all? He’s five feet ten.

YOUR BOOK INFO AND LINKS 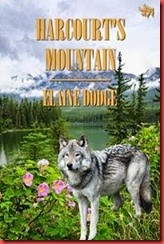 Spring, 1867 – The western frontier of British Columbia hardly seems a likely place for romance. Filthy, terrified and confused, HOPE BOOKER is waiting to be sold off the ‘bride’ ship. LUKE HARCOURT happens upon the sale. It’s not love at first sight, but he feels compelled to save her from a life of slavery and prostitution. To allay her fears of being raped, Luke promises never to touch her. Being a man of his word, this is a pledge he quickly finds almost impossible to keep.

Battling their growing attraction to each other, they must learn to live together in the forests of the wild and almost unexplored mountains. They face white water, Indians, wolves, and dangerous men.

No longer able to deny their feelings, their ‘happy-ever-after’ is shattered when a corrupt land baron forces Luke’s hand. Enraged at the man’s actions, Luke rides into town—and disappears.

Alone and pregnant, Hope faces the prospect of the worst winter in ten years. The trauma of fighting off a hungry grizzly brings on labor, but the baby is stuck. Luke meanwhile wakes up on a ship bound for South America, captained by a revengeful sadist who plans to murder him. Will Luke survive and make it back to Hope in time?

Harcourt’s Mountain is available from: