Okay, I'm a little late with the happies. But bear with me. We just returned from vacation yesterday, and if you look at this photo, it pretty much tells you about two of the three things our trip involved: 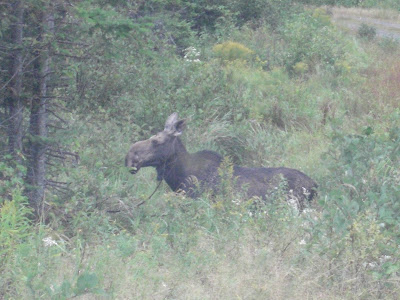 One of the two things is a little subtle, so I'll point it out. It was raining. It rained the entire time we were there, and rained on poor Dan on the few days of his bike trip the previous few days. I was starting to worry it was ark-building time.

But the second item--the moose!--was the end of a multi-year quest to finally see one. We were beginning to think they were mythical and only mentioned to entice tourists to visit.

We took a long drive Thursday morning out in the middle of nowhere, getting our so-not-made-for-muddy-dirt-roads car all messy, and after two+ hours were ready to give up. But we tried one more road and, voila! A moose! He looks like he's lying down, but really he's standing down in a water-filled ditch, eating watery plants.

Obviously, the rain didn't bother him a bit.

After we watched him for a while, he got annoyed with our presence, turned around and started walking away. We followed him slowly, and he began to trot. He whipped around a corner and when we got there, he had disappeared into the woods. This was the last we saw of him:

The other two things we did a lot of during the vacation were read, and eat. Well, what else IS there when you're stuck inside due to inclement weather?

But despite that weather, we had a nice, relaxing time. Maybe more relaxing than it would have been had the weather been sunny. So, happy time!
Posted by Elizabeth Delisi at 9:02 AM